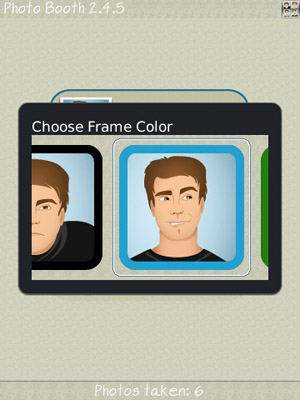 Description
Have you ever wanted to have a fun photography application on your BlackBerry device? Photo Booth is inspired by those public photo booths where people can take their passport pictures. Like a film strip, the four photos are shown consecutively on a vertical strip.

To use this application, simply open the application and select the "Take Shots" button. You can choose the frame color for your pictures and then your device's camera will then take four consecutive pictures (with flash). After all four pictures have been taken, they are put together as one image on a vertical strip with a colored frame.

This is a fun app for those who like to take pictures and have them woven together as one image.