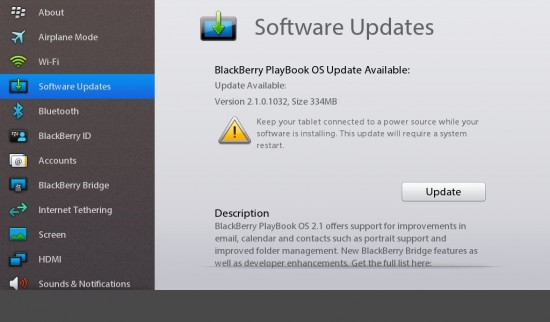 The wait is over and the first official version of the PlayBook OS 2.1.0.1032 is now available for download. You should have a notification of the update in the notificatio header on the PlayBook or you can swipe down from the top, select software updates then check for update. Make sure you have atleast 20% battery or have your PlayBook plugged in before doing the update.

With PlayBook OS 2.1, customers will now have the ability to:

•Secure all data on the tablet; the enterprise-grade encryption can now be extended to secure personal data stored on the device
•Text via SMS using the new version of BlackBerry Bridge (version 2.1) customers can send a text from their PlayBook through their BlackBerry smartphone; the new version of Bridge is available on BlackBerry App World
•Use the Messages, Contacts and Calendar apps in Portrait mode;
•“Print” documents from a PC to a BlackBerry PlayBook tablet using the Print To Go app even if the PC and tablet are connected to different networks;
Additionally, PlayBook OS 2.1 offers new features that simplify the deployment of the tablets in the enterprise with BlackBerry Mobile Fusion. These include over-the-air enrollment to the BlackBerry Mobile Fusion server, support for ActiveSync certificate-based authentication, and additional IT Policy controls.

For developers (and consumers), the In–App Payment system now extends to Android applications.

The update is now available as a free over-the-air download. Customers will automatically get a notification of the update on their PlayBook, or they can tap the gear icon (in top right corner) and check for the new version under “Software Updates”.